orangepalantir.org topicspace My UCL page
I was inspired to attempt a transfer, and now I wonder if I could create a model that produces similar results.

I set up an album with three examples of what I am doing. I apply some ink on water, and it spreads out, then I swirl the ink around and I get interesting patterns. The next step is to transfer the pattern to paper, by setting a piece of paper on the water. 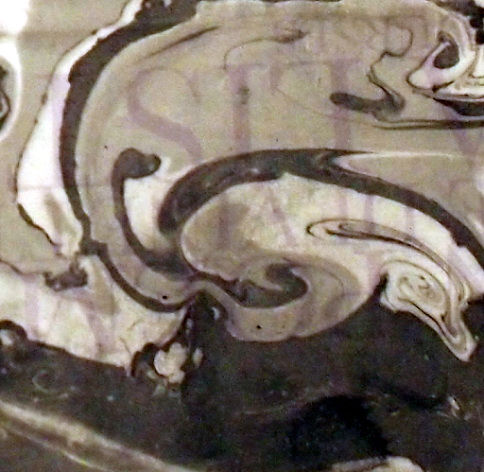 This was my first attempt and I really like the way it turned out, but I had transfered it onto a small post it note. I tried using some art paper and the ink wasn't absorbed quick enough.

I had two more attempts. That turned out decent, and I got to asking my self. How would I product a similar effect in a program. I started working on a program OilOnWater and I am trying to come up with a model for how the ink should move on top of the water. Also, how the water should move below the ink. It is tough to decide the level of depth the system should take. My goal is to create similar patterns, and not to model the actual system. I would also like to create a simplified model that has some basis in reality too though.

I am going to try and model the water as a fluid that moves with momentum, and the ink will be passive diffusing object that is pushed around by the water, but held together by surface tension.